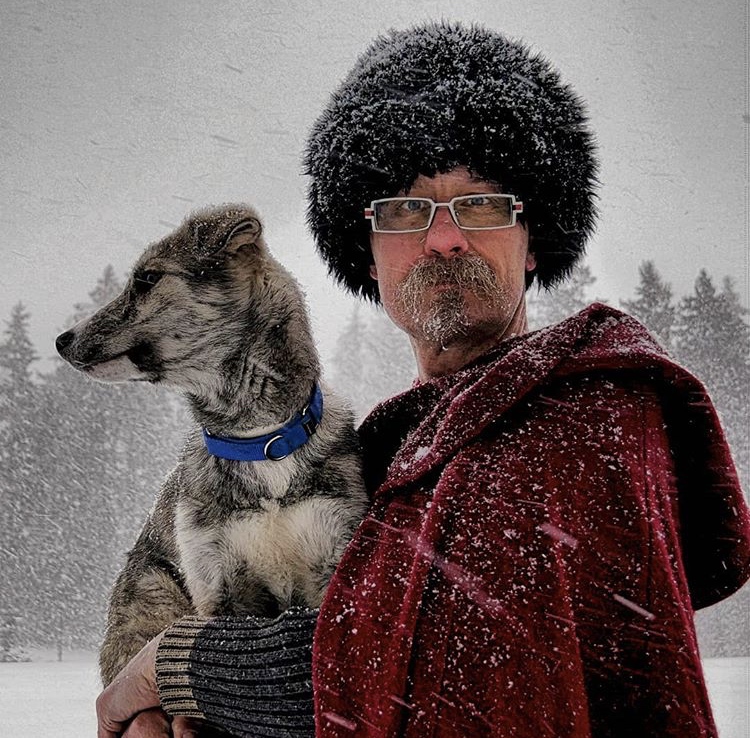 Oliver and Bruce Springsteen. I grabbed this photo from Oliver’s Instagram feed, so I don’t have a credit for it, but it’s richly deserved.

Right from that very first ride, motorcycling is about pushing ourselves a little further, beyond our comfort zones, beyond our perceived limits, and sometimes beyond common sense. Does this hunger to do more ever stop? Not if you’re Oliver Solaro. ‘Canada’s Ice Road Biker’ has just returned from delivering half a ton of desperately needed supplies for the sled dogs of Churchill, Manitoba… with a home-built snow bike. This conversation with one of motorcycling’s bigger-than-life characters is a master class in ingenuity, humour, and how when things go wrong, it just means better stories.

Here’s a link to a collection of Oliver’s photos from the Sundog Project. A cup of hot tea is recommended for viewing these. I’m still shivering.

If you need a little Brokentooth in your social media feed – and you do – I recommend following him on Instagram (@bwokentoof and @sun_doggie). He’s also on Facebook, here and here.

Churchill, Manitoba, has suffered greatly since the rail line – its only land link to the rest of Canada – was washed out in the spring of 2017 (the town lost its deepwater port in 2016). The politics of this issue are above my pay grade, but this article gives you a taste of how challenging the situation has been for the town, and how treacherous it now is to get there. If the arrival of supplies for humans is such a cause for celebration, you can imagine how difficult it’s been to sustain their animals. (It’s worth noting that the ‘cat train’ of tracked vehicles in this story delivered 9,000 kilograms of supplies; Oliver delivered close to 1,000 kilos with a motorcycle)

For more background on Oliver and his previous exploits, you can’t do much better than this excellent piece by Tim Huber for Common Tread.

Here’s the trailer for Jory Lyons’ film about Oliver, ‘AKA Brokentooth’. The film is well worth the watch, if you get the chance, especially if, like me, you’re prone to complaining about riding weather.

Here’s a link to that article in the Owen Sound Sun Times with a photo of a kilted Oliver taking his snow bike on its shakedown cruise to a local pie shop.

After I reached out to the Jerry Cans to get permission to play this excerpt from ‘Northern Lights’, I wrote Oliver to share the song with him. It turns out – and I guess I shouldn’t be surprised – they are one of his favourite bands. You can learn more about them here, and you can buy ‘Northern Lights’ for yourself here, among other places. Sincerest thanks to the band for sharing it with us… it was perfect.

I know I said a while back that I was going to fire up a Facebook page for This Motorcycle Life, and I did. Sort of. However, on second thought, I’ve ended up requesting my accounts be deleted. I hope that doesn’t cause any inconvenience or irritation for TML listeners. I’ll look forward to continuing to contribute to the fantastic motorcycling community on Instagram (which I know Facebook owns, of course) and on EatSleepRIDE.com. Come say hi!

5 comments on “Episode 9 – A Certain Madness”