Since the first motorcycles took to the road, they’ve been objects of fascination for artists. The trouble is, not many of those artists were actually riders, and images of motorcycles in popular culture ended up as symbols for things that weren’t always good, and ignored what makes them amazing. In this episode, I speak with Tempus Deficit, an artist who has been part of an explosion of art about motorcycles, by motorcyclists. Things get a little nerdy, but there’s no mistaking what motorcycle art says about our community, and why we should all be fans.

This is ‘Copilot’, the painting Doug talked about in our conversation. It nails the goofy sense of wonder that characterizes all of his work, and for some of us, riding itself.

First things first: If you’d like to follow Tempus Deficit and maybe own some of his work for yourself, you can find him on Etsy, right here. His Instagram handle is @tempusdeficit. To learn a bit more about him, here‘s an interview Doug did with NYC Motorcyclist about a year ago, and a selection from his work featured there. 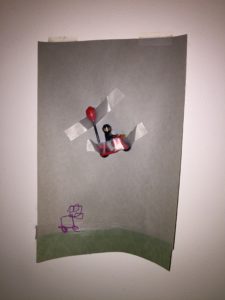 This is the homage to ‘Copilot’ Doug’s son created. Could there be higher praise?

I don’t know whether Oil & Ink was the first to formally exhibit art at custom motorcycle shows, but John Christenson has without a doubt been the most determined and professional about promoting this aspect of motorcycle culture. Whenever I see art at a bike show, I feel like the exhibitor owes a debt to Oil & Ink’s wonderful traveling pop-up galleries. You can learn more about Christenson and his work here. 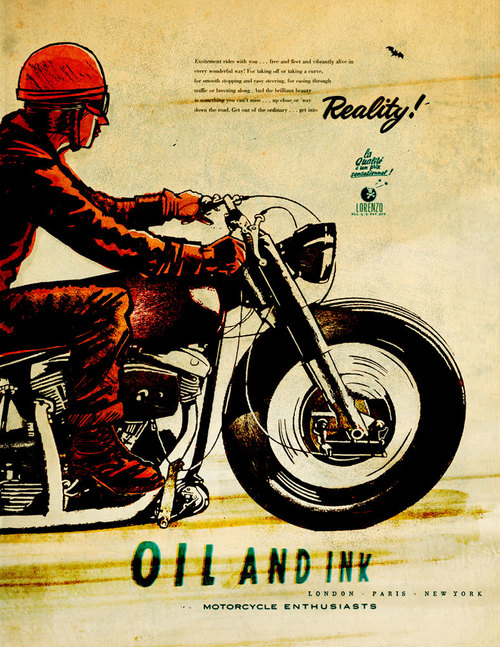 Borrowed from the web, here’s an example of Lorenzo’s work with Oil & Ink. Though darker and more dangerous than Tempus Deficit’s, it shares his ability to conjure up the kind of alternate reality that characterizes a great ride.

Lorenzo Eroticolor is the artist that Doug mentioned had become a friend and supporter. Not all of his work is motorcycle-centered, but it all captures the feeling of an era that inspires a lot of what’s going on in both motorcycling and motorcycle art today. I haven’t seen his work in that context, but it’s hard to imagine that it and the bikes around it don’t amplify each other tremendously. Here’s a link to his web site.

Doug mentioned a few other artists whose work mattered to him. Among them, David Uhl,  Christopher Myott, and the late David Mann. The work of Uhl and Mann is obviously much less whimsical and more what you might expect when you think about motorcycle art, but it paved the way and, for a lot of people, remains true to its subject. Christopher Myott, to my eyes at least, is more ‘new school’ and lighthearted. It’s easy to see why Doug likes it.

We spoke briefly about El Solitario, who I discussed last fall in my interview with Hugh Francis Anderson. El Solitario’s mission seems to be to provoke, whatever it takes. I don’t love all their bikes, but I love their irreverence, which they’ve managed to maintain even as they’ve morphed into a more conventional commercial enterprise. Here is “The Impostor,” the bike Doug mentioned, and that gave the motorcycle media fits when it was unveiled a few years ago.

In my introduction, I mentioned Olivier, a listener from Belgium. It turns out that in Europe, motorcyclists are popular fodder for cartoonists. You just don’t see this kind of thing here in North America… it’s awesome and hilarious. Here’s one example, Joe Bar Team (start on Wikipedia, and Google your way from there), and another, Rag Racers.

Finally, here’s what you need to know about Across the Board, the band that performed this episode’s playlist recommendation, “Sonic Boom.” Their web site is here, and you can buy that tune for your very own listening pleasure on iTunes.